skip to main | skip to sidebar
Welcome to the page of Ancient India's Military.... 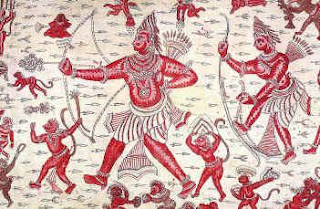 Let me begin this interesting topic that consists of unbelievable true facts that startle the minds of every Indian with a beautiful quote from an Arab proverb:

“The Persians are famed for their archers, the Turks for their horsemen, and for its armies.”

We have heard from the modern textbooks about that our country had no history of invading other countries in its great past. But this fact doesn’t provide a meaning that doesn’t had any well defined military structure. Well, if anyone had such a wrong thought about our prestigious , following are some facts that I have collected to correct such minds…

is one of the oldest civilizations on earth, going back more than 7,000 years. Although divided from the rest of Asia by the Himalayan mountains, has for most of its history been fighting numerous and violent wars among itself. During its long history, there could be anywhere from 16 to more than a hundred kingdoms, all fighting each other, making and breaking alliances. In the harsh deserts to the northwest were the fierce Rajput (literally sons of kings) kingdoms, who fought on horseback and camelback. In central were mighty kingdoms descended from the Aryan invaders who invaded around 1500 BC. In the jungles to the south were other large and formidable kingdoms, more ancient than the Aryan ones, the original inhabitants of . In the Deccan Plateau, where the Kingdoms of the north and the south met, were other smaller nations, but with some of the fiercest fighters on the subcontinent. To the east were the kingdoms of Bengal and , to the north was the feared .

Warfare in ancient centered around the chariot. Indian chariots were nothing like the light, sleek chariots of . They were massive, made of wood and iron, and intricately decorated in gold. They had four wheels, and typically held two men-the charioteer, and an archer who also had a weapon for hand to hand combat.

This archer, standing on the chariot, would be a good six or more feet off the ground, giving him a significant advantage over enemy infantry. Some chariots held more men, the largest could hold seven men. Indian chariots were so large and heavy that they required four to six horses to pull them. Unlike Egyptian chariots, which moved quickly and fired arrows into the enemy ranks, Indian chariots often charged right into melee battle. They crushed enemy soldiers under their wheels, trampled them under the horses, all while the soldier(s) on the chariot fired arrows into them, or fought it out hand to hand.

No description of ’s ancient military is complete without mentioning the elephant. was the first nation to use the elephant in battle (~1500BC) and the last nation to stop using it in battle (1800’s AD). Wars were frequently fought over territories that had a great deal of elephants. Elephants from the tip of south and were the most prized as they were considered the fiercest in battle. Often times, a king’s wealth was measured in how many elephants he owned. A single Indian prince might own more elephants than all of . According to Kautilya, the army of the Indian emperor Chandragupta Maurya had more than 21,000 elephants. War elephants typically were heavily armored. They had a castle like structure on their back where several warriors and a mahout, who guided the elephant, would be housed. The number of warriors varied anywhere from one to six warriors, and would be armed with an arsenal of weapons, bows and arrows, long lances, javelins, tridents, and a variety of polearms. The elephants themselves had long daggers or swords, sometimes several feet long, attached to their tusks.

The way in elephants were used in battle varied widely as well. One common tactic, used by Porus at the Hydaspes, was to place the elephants a distance apart, anywhere from 40 to 100 feet. These elephants would act like mobile fortresses, where the rest of the army could rally around. Another common tactic, probably the most dangerous and effective one, was to use the elephants to directly assault enemy lines. The elephants would be arranged in a wall formation, and be heavily armored in iron or steel from head to foot. Long steel swords, often coated with poison, would be attached to their tusks. The mahouts would then drive them forward in a coordinated charge, wreaking havoc in enemy ranks. Archers or lancers on top of the elephants would pick off enemy soldiers as well. One king even went as far as to train his elephants to swing heavy iron balls on chains with their trunks. The very sight of a wall of heavily armored elephants charging, whirling huge iron balls with their trunks, their tusks tipped with poisoned swords, the soldiers on the elephant wielding enormous lances, would often cause the enemy to break ranks and flee.

The cavalry of Indian armies is, for the most part, not noteworthy. The cavalry of the Middle Eastern and Arab armies were probably superior. There are exceptions though. The Rajput cavalry was extremely skilled, and man for man, was more than a match for the Mughal cavalry, as they proved several times. They were lightly armored, and moved extremely swiftly. Armed with a light curved sword and a small circular shield, they could charge and fight with incredible speed. Many carried bows and arrows, and were expert archers. The Rajput army was almost entirely composed of cavalry, and were powerful enough that they were able to keep the Muslim forces in check for many years. In the other armies of cavalry were also used, sometimes in large numbers, but rarely were they equipped with bows and arrows. Their role was either to protect the elephants and chariots, or to charge into melee battle.

The bulk of the Indian army, and most other armies in the world, were the infantry, or foot soldiers. The infantry were equipped with a huge variety of weapons, which differed hugely across . Probably the most common weapon was the sword, but even this came in hundreds of shapes across . Indian archers used a bow similar to the English longbow, in that it was as tall as the person using it. However, Indian bows were also recurved. Armies in were typically larger than those of . It was common to see armies of hundreds of thousands fighting on the battlefield, even thought the kingdoms themselves might be small in size. As infantry formed the majority of the army, a typical battle would look like a sea of infantry and cavalry fighting, while the chariots and elephants stood out.

India was one of the first nations to implement tactics, divisions, and formations. Armies did not simply rush out onto the battlefield; there were commanders who carefully put their massive armies in intricate formations. Some formations were: Chakra (wheel) Vyuha, Suchi (needle) Vyuha, Chayana (hawk) Vyuha and Mala (garland), and Garuda (eagle). Another one I read about recently was the lotus formation, where the archers would be on the inside, and the infantry and cavalry would be arranged like a lotus flower, protecting them.

Their armor differed greatly as well. Some kingdoms, especially in south wore no armor, because of the extreme heat. Others wore tough sturdy armor, made of interlocking iron, steel, and leather plates. Many warriors wore no armor, but instead wore silk clothing. This actually worked to block arrows, which couldn’t penetrate the silk fibers.

Ancient has been home to many unique weapons. The world’s first all steel bow was made in . Some other weapons from the subcontinent are the famous kukri knife, the tiger claw weapon used by assassins, tridents, the long handled mace, swords, axes, and spears of all shapes and sizes.

The Army of The Mauryan Empire
The Mauryan empire was the first empire that managed to unite all of . This was partially because of their complex army structure. Like most ancient Indian armies, the Mauryan army had 4 types of troops- elephant (gaja), chariot (ratha), cavalry (turanga), and infantry (pada).

The army was broken into many units. The smallest unit was called a patti, and had 1 chariot, 1 elephant, 3 cavalry and 5 infantry. The elephant and chariot would typically be in the center with the cavalry and infantry surrounding them. Three patti made up a Sena mukha, and three Sena Mukha made up a Gulma. Other divisions were the Gana, Vahini, Pratana, Camu and Ani kini, each of which was three times as big as the one preceding it. The Aksauhini was composed of ten Ani kini, and was the largest unit in an army.

The Mauryan army had multiple Aksauhini's. The standing army had three-quarter million troops, one of the largest armies in the world at the time.

A variety of formations were used in the Mauryan army. Formations were known as vyuha, each one had a center, two flanks and two wings. There were thirty main vyuha used, divided into four main categories. One example of a vyuha would be the Padma vyuha or lotus formation.

It would be easy to visualise the 'padma vyuha' if it is imagined as a six pointed star. The Deputy Commanders-in-Chief would be placed at each outer point of the petals and at the inner end, where each end of lotus petal joins with the other, to form an inner-circle resembling the corolla of the lotus, the Commanders-in-Chief would be stationed. The space between any two 'petals' is the only access to reach the centre of the 'lotus' where the Supreme Commander was placed. If a contingent of enemy soldiers moved between any two petals for this purpose, the petals would close in and crush the invader like the powerful tentacles of a crab.

The Garuda Vyuha or Eagle formation was another commonly used formation.

The Garuda Vyuha had a 'beak' where the best elite Kshatriya soldiers would be placed in tight wedge formation. The 'head,' behind the beak had a small contigent of reserves, also of good quality. Often, war elephants would be placed in the beak and head. Two broad 'wings' would sweep out behind the head, with the swiftest troops - the chariots and cavalry at the outside. Behind the wings, the body, would consist of reserves.

The Mauryan army was composed of people all over the subcontinent. In addition, Chandragupta Maurya did not discriminate against different castes, as he was of low caste himself (reputedly he was the son of a peacock tamer ). As a result, there were soldiers in his army from all castes, making the army very diverse.

The core of the army was composed of Uttarapathian warriors, from central and western . Uttarapatha had many militaristic peoples – like the Kambojas, Yavanas, Sakas and Vardas. Other peoples in the Mauryan army were the Maghadas, Assamese, and Cheras. Even the Nagas (literally serpents, because they worshiped cobras), a mystical people to the east, were incorporated into the army.

Posted by Ajay Prabhakar at 10:19 PM No comments: